how to combine Led lighting in the acoustic panels and Cinema hall ?

how to combine Led lighting in the acoustic panels and Cinema hall ?

The idea of combine and install led lighting in the Cinema hall and even in Auditorium hall is a quite familiar to you as I guess. We all know that it is adding very fancy look to the cinema, but how to decide the design and shape?

First you need to analyze the size of your movie theater /Cinema hall.

Does it has stairs? In the cinema hall, a line of LED lighting is installed on all the stairs.

But if it is a conference hall or Auditorium, there is no need of line on each step,

but you can install the LED on every 3 or 4 steps.

stair lights warn them not to fall. In some cases, there are no stairs in the hall, and in such a situation, the LED

lighting should be installed to the extent of the hall around it.

including the LED light and it is lit again towards the end of the movie or during commercials.

And there is also the LED light that is inside the wall between the acoustic wall panels. Such lighting adds a great

deal of aesthetics and a look of luxury to the hall.

You can design straight and short lines horizontally or vertically. And if you want something more special then you

can draw diagonal lines or literally shapes such as hexagons and more.

What is important is that the owner of the cinema has simple and fast control over turning off the LED lights, since

they can sometimes be too harsh to the eye or simply need to be switched on or off. It is highly recommended to

and off. This will give you more flexibility to decide how much you want to light each time. Depending on changing

situations, you may choose to use a larger or smaller amount of LED lighting so that as many lines as possible are

separated in the hall. This will also allow you to design the hall with a different color LED bulb and you can also use

it as a sign. For example, you can determine that when a red LED appears, this is a commercial break and when

blue LED turn on then it is a sign that the movie is about to start soon, etc.

If so, let us say that the LED light is not only an aesthetic and impressive design but also an important tool in the

cinema halls in order to warn visitors from the stairs in the dark hall and also to mark different things to them.

However, LED lighting is a particularly good option in order to prepare the hall for fancy look and impressive style

between the panels in the wall  or by the lighting strip on the stairs. 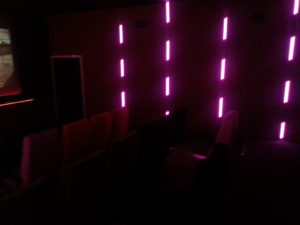 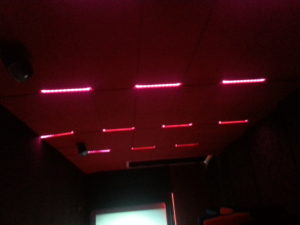 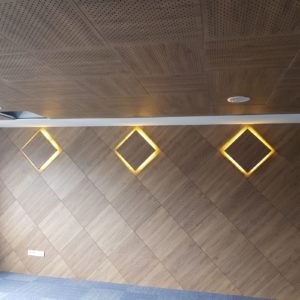