How does a Parliament Auditorium look like from inside?

How does a Parliament Auditorium look like from inside?

One of the characteristics of the plenum is its height – three stories. Members of the parliament sit on the lower level, with the horseshoe-shaped government table in the middle. The seats of parliament members who are not members of the government are placed on his right, on his left and behind the cabinet table. At the front of the hall is the stage where the Speaker of the parliament or one of his deputies, the Secretary of the parliament or one of his deputies and a parliamentary registrar are sitting. Speakers speak from the podium. Behind the stage can be a wall designed by a famous local artist, or any other design that may express important symbol of the country.

The ceiling in the parliament hall is very important because it must express innovative design and yet must be acoustic. In some cases, additional roof coverings must have been added below or above ceilings that already existed in old parliament buildings, In other words, without damaging the ceiling in the building, add another suspended ceiling above or below the existing ceiling. It could be also possible to use a ceiling hanging system such as Baffle ceiling or Canopy ceiling.

According to many original designs, natural light coming from many windows below the ceiling would be its main source of light, but soon it turned out that it was not a good idea and the windows were sealed.

In the plenum there are two stands: the VIP guests’ gallery and the public gallery. The public gallery is protected by armored glass, following past cases in many parliamentarians, as in the case where a mentally disturbed person threw a grenade into the plenum in the direction of the cabinet table. According to certain designs, a small balcony can be seen on the front wall of the plenum for the President of the State. Of course, in advanced countries, the parliament’s roof is shielded from missiles. 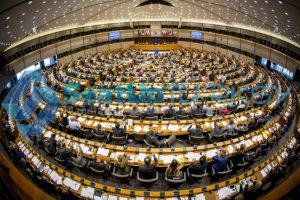 The conference rooms and committee rooms are usually located on the first floor, of course these rooms must contain elements of security and protection such as walls protected against bombs. There is an important attitude to the arrangement of the seating around the table and to the location where the Head of chairman sits in relation to the other participants in the room. Most of the walls of the meeting rooms are covered with wooden panels; In each room they install wooden panels from other kind of wood and other kind of model. The use of wood panels for the walls in the conference rooms and committees rooms related to the fact that wooden panel also have high acoustic ability but also provide a warm and comfortable feeling for the participants. 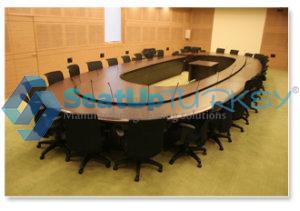 The government room is usually on the second floor of parliament. There are no government meetings there, but meetings are held with the participation of ministers. Although most of the dimensions of government rooms are small compared to the other rooms and halls of parliament, this room must be one of the nicest spaces in Parliament since this is the government room! Most of it is occupied by a round table made of wooden heavy oak, and on top of each seat is a black leather board for writing. Above the table there is an intermediate white staircase, also round, with light fixtures on it. The floor is covered with a thick acoustic carpet. The walls of the room are covered with wooden panel with light color of oak and on the wall facing the entrance to the room hangs some artistic painting by a famous local artist or the national flag, or any other local symbol connected to the state and the government.

Over the years, most of the world’s parliamentarians have decided to add another auditorium for additional use, because sometimes conferences or less formal discussions are held that require a place other than the central parliament. Such a hall can also be used for press conferences or even small Parties or internal statements.

Most of these auditoriums have between 500 and 1,000 seats. The wall behind the auditorium is covered with a massive wooden panels with a symbol on it. A lower floor is usually built for these auditoriums, and on this floor there are gyms for members and parliamentarians. There may have been warehouses and even libraries on the that lower floor. 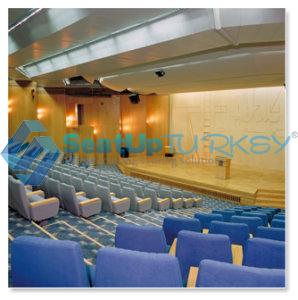 Our Company is taking part in renewing parliament buildings in the aspect of furniture, acoustic solutions and more.